Well, posting on a regular basis didn’t go quite as I’d hoped or planned. The internet service at the dive resort wasn’t free (as advertised in multiple locations) and was pricey enough that I opted not to spend a lot of time attempting to update the blog, and our Western Highlands lodging had no service at all. So, in a nutshell:

The diving in Milne Bay was essentially everything it was cracked up to to be: healthy, vibrant reefs with a huge biomass of fish and inverts and visibility that ranged from good (by our Unalaska standards) to unbelievable. The only minor disappointment was the number of dive sites available for muck diving, which is supposed to be Milne Bay’s primary attraction. The resort had only one site to visit during our 13 days there, and though we had four very good dives there it was a bit of a let-down to find it was the only muck site we’d visit. That aside, the diving was a roaring success. Midway through the stay in Milne Bay we went to Alotau for the annual canoe and kundu festival. Attending this was definitely a bonus: tribes from all around the province brought traditional dancers, war canoes and sailboats to the festival. 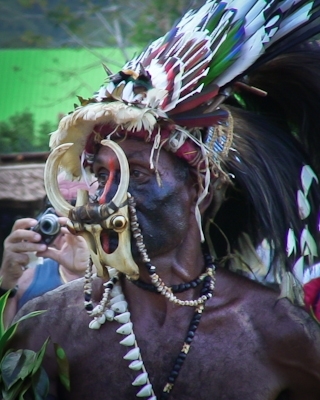 We were able to watch a couple of canoe and sailboat races, and watched the traditional dancers from five different tribes. The costumes worn by the dancers appeared to still be almost entirely “original,” using feathers, bark, leaves, shells, etc. Lots of photo opps this day and hopefully I’ll have a few good pics to put in a gallery after we get home.

After leaving Milne Bay Province we headed to Paiya village in the Western Highlands for a short visit to interior PNG. Our lodging was a rustic guesthouse near Magic Mountain, at the base of Mt. Hagen, the third highest peak in Papua New Guinea. We were not particularly well-prepared for this part of our visit. At some point in all our planning we failed to note that the Highlands are, well, high. A two-hour evening stroll on the day of our arrival had us both gasping and wondering if three weeks of diving had made us more tired than we realized. Two days later we went on a six-hour hike up Mt. Hagen. The blood pounding in my temples at every step, the fact that I couldn’t seem to walk for more than about five minutes at a time and something our driver the first day had said about the airport being at 7000 feet got me to thinking that just maybe oxygen levels might be an issue… Sure enough, we discovered that we weren’t just trotting along in some little hills: Paiya village is at an elevation of about 8500 feet, and we’d hiked up to about 9500 feet before calling it quits and heading back to the lodge. A little bit of research after we returned to Australia says that altitude sickness can result in flu-like symptoms, which may explain why Brandon has been feeling like crap for the last three days. And Dan, please, none of this “I told you so stuff when we get back!

We’ve just completed flight three of seven for our return trip, and are in Sydney at the moment. It’s been somewhat eventful so far: Airlines PNG decided to cancel most of their flights from Port Moresby from Cairns, including ours, but failed to notify their passengers of this minor issue. Fortunately we had a travel agent for this leg – they knew about the cancellation even if we didn’t and using some rather entertaining PNG-style diplomacy made sure we got our tickets for a different airline and flight at no additional cost. Once we returned to Australia we found that the Airbus 380s, on which were scheduled from Sydney to Los Angeles, have been taken out of the Qantas fleet indefinitely – something about engines blowing up mid-flight and falling off. That too was resolved without much problem, but when I called home Shari said that flights to Dutch Harbor have been canceled for two days because the barometric pressure is too high. I’m definitely not making any dinner plans for Friday night in Unalaska!

Pics to follow in a week or so – stay tuned –