Or at least that’s what they seem to cost.

Over a year ago Brandon and I decided we wanted both video and stills for this trip. We spent an inordinate amount of time discussing what pieces of equipment and which accessories to take in order to best utilize our weight allowances and avoid lugging about massive bags of camera gear. We settled on the video camera sans lights and battery pods, and my aged but trusty Canon point & shoot rather than the bulky Nikon DSLR, since my skill level just doesn’t seem to justify the 24kg of camera gear that the DSLR would entail. In order to have a bit more flexibility with the P&S I bought a strobe and both WA and macro wet lenses for it – cost not insignificant.

After I got the new stuff I put it all together, making sure the strobe and lenses were properly attached, the u/w housing securely mounted, etc. Notice I didn’t mention closing the housing… I then took the rig to the local pool for a spin. I jumped into the pool dressed in my dive costume, grabbed my camera off the pool deck and plunged it into the water. Hmmm… Funny how quickly a camera quits working after it’s submerged. In retrospect I should have recognized an ill omen when it found me, but alas I did not. Instead I chalked this up to experience, vowed never to flood a camera again, and immediately bought a used replacement on eBay for a mere $55. Problem solved! The prices on used cameras were so good I even considered getting another one as a spare, but eventually decided that was really a rather ridiculous notion – a spare camera? C’mon, who needs that? What could possibly go wrong at this point?

So Brandon and I left on our grand adventure, loaded with 8.5kg of camera gear both old and new. The new-old Canon got lots of use, and performed quite well. For about six days, at which time it quit. It wasn’t flooded, or dropped. It wasn’t smacked against a bulkhead, and it didn’t get washed in the laundry. It just quit, mid-dive. The shutter wouldn’t close and something was rattling inside. Prognosis poor. Mind you, at this point we’re miles and days away from land, and six year old cameras aren’t easily found at the local photo shop, so the onboard photo pro and I took it upon ourselves to investigate further. Perhaps we could repair this ourselves! It’s a $55, essentially irreplaceable and irreparable camera – what’s there to lose? Well, lots of screws, for a start. Plastic parts. Circuit board connections. By the time I couldn’t find anymore screws to remove, I had a bowl of camera parts and a camera body, with amputations, that still had a half-open shutter and an ominous rattle. A spare camera would sure be nice about now. I gave the camera and bowl of parts to the photo pro as a going away present, a kind of jigsaw puzzle for slow days on the boat. 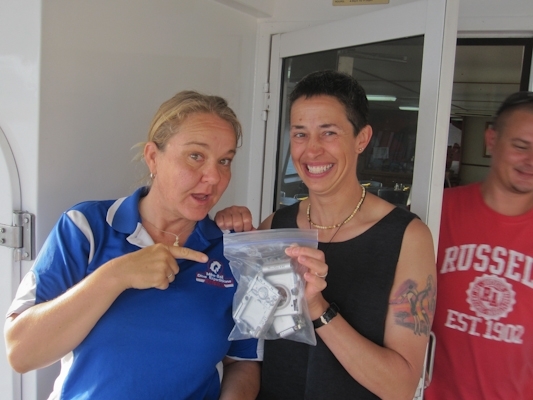 She gave me the name of a reputable u/w camera dealer in Cairns.

We’d planned to spend the day exploring the Daintree rainforest but instead explored the extent to which I could use my credit card overseas. For all practical purposes virtually none of my equipment was compatible with anything the camera guy had for sale – i.e. I’ll have to replace more than just the camera and housing if I want to take the kinds of pictures I’d hoped to take. And I really wanted another Canon housing rather than an Ikelite housing, but at this point I can’t be too picky – if I want a new camera and housing, this is it. Hmmm… How ’bout a trade-in on my remaining equipment? Sorry, no, he says. I wouldn’t want to insult you with what I think it’s worth. Ouch. Hmmm… How badly do I want a camera for our journey to PNG? Pretty badly, to be honest. So… New camera. New housing. New wet lenses. Cost not insignificant.

Off to PNG. I love the new camera and I’ve taken about 40 pictures so far. I’m looking forward to the opportunity to use it underwater. Per manufacturer instructions I took the new housing for a pressure test on an hour-long dive before using it with the camera. A-okay. Next day I put the camera in the housing and we jumped in the water. Nice location to try some big shots, so I screwed the WA lens to the port at the front of the housing and snapped a few shots. All was well until we saw the cool crocodile fish and I wanted to take some photos of it. To do so I’d need to remove the WA lens. Funny, I didn’t think that molded port on the front of the housing was supposed to move. And funny, I didn’t really care for the moisture I saw rapidly accumulating inside my housing. Hadn’t I vowed months ago not to flood another camera? I aborted my dive and headed back to the boat, tightening the port as much as possible as I swam, but alas, my efforts fell far short of saving my camera, the third such casualty since we began planning this trip. Even 24 hours surrounded by silica packets wasn’t enough to revive this one.

Final note: The camera guy in Cairns is going to replace the defective and ruined items. And the memory card was salvaged and so I do have a very few photos, cost not insignificant, as mementos of this trip!